“The Death (And Life) Of Carl Naardlinger” takes place at the place at which identity and humanity intersect. A metaphysical and occasionally absurdist comedy, it stars Matt Baram as one of the title characters.

Baram is Carl Naardlinger. Married to real estate mini-mogul Pam (Grace Lynn Kung), he’s an IT guy, spending his days solving people’s computer problems on the phone. His well-ordered suburban life is thrown askew with a knock on the door from a police officer from the missing persons bureau. Detective Renton (Anand Rajaram) is on the hunt for a man who’s disappeared, a man with the unlikely name of Carl Naardlinger.

The interaction leaves Carl unsettled. Over time he becomes fixated on finding the man who shares his name even though he’s presumed dead. His search becomes muddied when he finds the man’s identical twin brother (Mark Forward).

“The Death (And Life) Of Carl Naardlinger” has laughs but it isn’t quite a comedy. Instead it takes its bizarre premise and mines some real emotional moments from the material. The quirky idea could have made for an all out farce, a film with broad performances, but Katherine Schlemmer and cast opt for a thoughtful, po-faced approach. It’s that gentle, humanist attitude that allows the absurdist elements of the story to feel as grounded as a movie that hinges on coincidence and doppelgängers could probably ever feel. As quirky as the idea may be, the search for identity and what it truly means to understand your world is a universal desire and the film does a nice job of essaying that search.

I always get butterflies in my stomach when the review screener is a comedy. It’s nerves, it is. Worry that the film won’t be up to much. I mean, no one wants to sit through a stinker, and from the reviewer’s point of view, championing an indie film is always a much more pleasant experience than knocking it. But there’s something extra disappointing about comedies which don’t do well: that insidious cringe of a joke falling flat in a social situation, the naked humanity of humour failing to translate. Comedy has it hard, in real life as well as in film. Want to scare someone? Just jump out at them when they are least expecting it, a lazy dynamic which is the stock in trade of a million billion sub-par slashers with booming sound effects and cheap jump scares. Try making someone laugh, though! Nowhere near as easy. Furthermore, because comedies are relatively cheap to produce, they are a go-to genre for the indie film, with often mixed and awkward results.

Comedy begins with the script, which needs to be airtight in a way that other genre products are not required to be. And The Death (and Life) of Carl Naardlinger (easy for you to say), is certainly predicated upon an intriguing premise. The eponymous (or is he?) Carl (Matt Baram) is a gentle, so-so IT specialist, his thwarted ambitions communicated by his daily work within a call centre (an abiding trope of the indie film is the vilification of desk jobs, perhaps a visual expression of the behind the scenes workaday frustrations which invariably fund these passion projects). Still, this white middle-class fella isn’t doing so bad, not really. Nice house, gainful employment, impossibly cute wife (Pam, played by Grace Lynn Kung). Still, however, just like those similar cinematic sad sacks in stuff like American Beauty and Lost in Translation, it’s not enough. Something isn’t right. It feels as if something is missing: Carl is existential. He even goes and buys some weed at one point (and, of course, his dealer is a clean-cut hipster on a mountain bike, none of your low-level runners desperate for points here). But then, unannounced, a Private Dick turns up at his door, looking for him, Carl Naardlinger, who has apparently been missing for quite some time, presumed dead: trippy. But before anyone has the opportunity to call Mulder and Scully, it transpires that there is actually another Carl Naardlinger knocking about in Toronto, leading to this comedic confusion of identities – yikes!

Our Carl feels a spiritual affinity with this second Carl and ingratiates himself in the missing lad’s life. He even, much to the chagrin of his wife, spearheads a search party for the absent Carl. But do you know what? I reckon he’s really searching for himself, scraping about for meaning in his ostensibly bland existence. And, lo, he does find himself! Sort of. In a delightfully convoluted twist, Our Carl happens upon a bloke who is the double of AWOL Carl. This New Carl is Missing Carl’s identical twin (Don, played by Mark Forward), and it only turns out that the poor bloke (New Carl) has absolutely no idea that he is a sibling. Double yikes?

With its dualities and coincidences, The Death (and Life) of Carl Naardlinger deftly plays the disparate notes of fluke and fate that make up the key of life. There are a few moments which are off-pitch, however. A subplot involving Pam successfully wishing a neighbour dead doesn’t really go anywhere, and the arguments that the couple have in the second half seem unconvincingly contrived for drama’s sake. But ultimately, there something much bleaker referred to in the film’s denouement, a nihilistic suggestion that life is about the search, the search, the search, with no achievable explanations or interpretations offered at the end of the slog, a narrative wrinkle that (pleasingly) rests uneasily with the clean, sit-com milieu of the film. Thus, The Death (and Life) of Carl Naardlinger, whose ambitions run from wanting to make you laugh to demanding you feel deeply, ascends from gently amusing to subversively disturbing.

The Death (and Life) of Carl Naardlinger – I spend a good portion of my time thinking about parallel universes, choice, and destiny. As a totally charmed, super lucky, very fortunate girl (I mean eerily and inexplicably so in some ways) with a strong sense of intuition and a healthy respect for “things happening for a reason,” I’m definitely drawn to films that explore these themes. This one appears to do so and with the extra bonus of it being done artfully and humorously. This has a high probability I think of coming out one of my favorites of the festival. 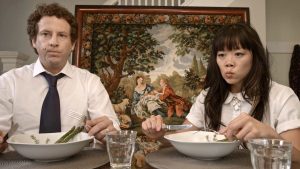 Carl may have had enough. 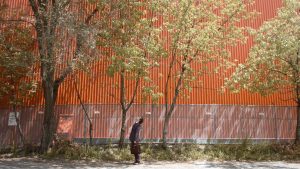 What’s in the case Don? 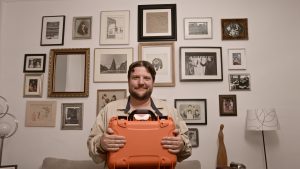 Mark Forward playing Don Beamershmiddle: Don is hiding something in this orange case, it’s his job!

Salads are the basis for happiness 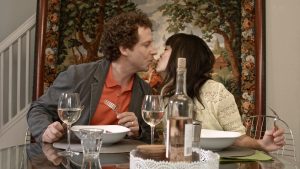 Matt Baram and Grace Lynn Kung playing Carl and Pam Naardlinger: Who knew, but it turns out Salads are the basis for successful, if not stress-free, relationships.

Pam looking to the future 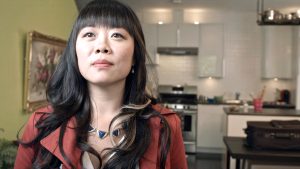 Grace Lynn Kung playing Pam Naardlinger: In Real Estate you have to keep your eyes open!