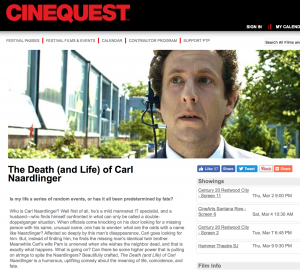 Is my life a series of random events, or has it all been predetermined by fate?

Who is Carl Naardlinger? Well first of all, he’s a mild mannered IT specialist, and a husband—who finds himself confronted in what can only be called a double-doppelganger situation. When officials come knocking on his door looking for a missing person with his same, unusual name, one has to wonder: what are the odds with a name like Naardlinger? Affected so deeply by this man’s disappearance, Carl goes looking for him. But, instead of finding him, he finds the missing man’s identical twin brother. Meanwhile Carl’s wife Pam is unnerved when she wishes the neighbor dead, and that is exactly what happens. What is going on? Can there be some higher power that is pulling on strings to spite the Naardlingers? Beautifully crafted, The Death (and Life) of Carl Naardlinger is a humorous, uplifting comedy about the meaning of life, coincidence, and fate.